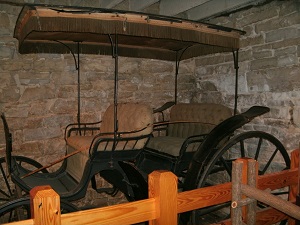 After the seat of government moved to the city of Jefferson in 1826, the lower end of Jefferson Street became a lively commercial and transportation hub on the Missouri River. In 1839, James A. Crump built what is now known as the Lohman Building, a sturdy stone structure that would serve as a grocery store, warehouse, tavern, telegraph office and hotel for the growing capital city. After opening a grocery store in the basement of the west section, he sold the east section to John Yount and the center section to E. B. Cordell and James Dunnica. He then leased the upper floors from the three co-owners and opened the Missouri House hotel. The area became known as "the landing," and Crump's hotel earned a reputation as a meeting place for rivermen and legislators.

With the coming of the Pacific Railroad, business boomed in the 1850s. The capital city became the transfer point for goods coming from the east by rail and heading west by steamboat. Much of this activity occurred at the landing. In 1852, Charles Maus and his brother-in-law, Charles Lohman, bought the east section of Crump's building and opened a general store. In response to a growing demand for hotel accommodations, Maus built a hotel across the street from Crump's building in 1855. His brother, Christopher Maus, built a home a few yards south of the hotel. The sturdy brick house exemplifies the small, red brick residences common in Jefferson City during this time period.

Charles Maus first named his hotel the Missouri Hotel and then later the Veranda Hotel. The name changed for a third and final time when Maus returned home from service during the Civil War. He renamed his hotel the Union Hotel as a declaration of his wartime sentiments.

Lohman dissolved his partnership with Maus in 1859 and eventually bought the two remaining sections of what would become known as the Lohman Building. He subsequently developed one of the city's largest warehouse and mercantile businesses at the site.

After the war, river traffic slowed as the railroad offered cheaper and faster transportation. In the 1870s, both Lohman and Maus relocated their businesses away from the landing. The Union Hotel and the Lohman Building were used as storage and tenements until the early 20th century when they became a factory and offices for the Tweedie Shoe Co.

The state acquired the property in the 1960s with the initial intent of building a parking lot, but concerned citizens led by Elizabeth Rozier spearheaded a movement to preserve the buildings. The Lohman Building was placed on the National Register of Historic Places in 1969, and in 1974, the state's bicentennial commission adopted the Jefferson Landing proposal as the state's official bicentennial project. The Lohman Building and Union Hotel were restored, and the Lohman Building was opened to the public on July 4, 1976, as the cornerstone of Jefferson Landing State Historic Site.

Jefferson Landing State Historic Site is significant as a rare Missouri River landing. The Lohman Building depicts an 1850s general store and warehouse and features a film on the history of the site and of Jefferson City. It also serves as a support facility for the Missouri State Museum, located on the main floor of the Capitol. The Union Hotel houses the Elizabeth Rozier Gallery with rotating exhibits emphasizing Missouri's history, art and culture. The ground floor of the former hotel keeps up the tradition of providing transportation to the heartland of the state by serving as the city's Amtrak train station.