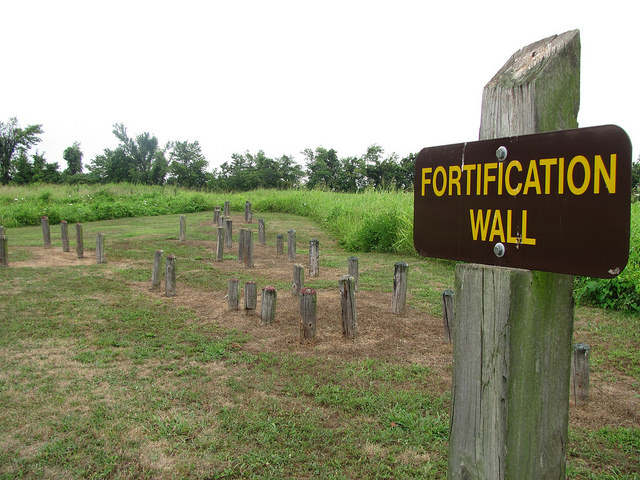 Visitors will discover an archaeological treasure at Towosahgy State Historic Site. Located in southern Mississippi County, the site preserves the remains of a once flourishing American Indian community. Towosahgy (tah-wah-saw-ge), a borrowed Osage word meaning “Old Town,” was the location of a once-fortified American Indian village and ceremonial center between A.D. 1000 and A.D. 1400.

Although other groups of Indigenous people had lived in this area for 9,000 years prior to the founding of the village, their societies did not reach the highly organized level of the people at Towosahgy. The inhabitants of the village were part of the Mississippian cultural tradition, so named as most of these archaeological sites are located near the Mississippi River.

Different from their predecessors, the American Indians who lived at Towosahgy were town dwellers. There were other, smaller hamlets within a short distance of the main town and the entire area formed a well-developed cultural and political system. The well-constructed dwellings, utensils and other artifacts uncovered at the site indicate the inhabitants led a relatively comfortable lifestyle.

The residents of Towosahgy raised crops of beans, maize, squash and sunflowers in fields outside the walls that surrounded the village. They also lived off wild game, fish, persimmons, wild plums and a variety of nuts. They relied on trade to obtain other necessary items such as salt, paint, chert for tools and ceremonial materials. For transportation, they may have used large dugout canoes. Their houses were constructed by digging a shallow pit, which left the floor of the structure below the surface of the ground. Walls were built of small posts placed in narrow trenches. A central fire hearth and associated packed clay floor mark the original floors of these houses.

Cyrus Thomas of the Smithsonian Institution in Washington, D.C. conducted the first scientific excavations of the site in 1891 and published a map of the village area in 1894. On the map, the ceremonial center is well defined by a fortification wall that once encircled most of the village. On the map of the village are six of the seven earthen mounds, two depressions or borrow pits where dirt was removed to construct the mounds, and the house depressions. Thomas knew the site as Beckwith’s Fort, named for the landowner at the time of his visit.

In 1967, the state purchased the site and since then, the Missouri Department of Natural Resources has conducted limited archaeological investigations in conjunction with the University of Missouri-Columbia. At least three (and probably four) log stockade walls were unearthed, as evidenced by dug trenches, post holes and charred fragments of actual posts. These walls were not straight but had bastions protruding from them. These bastions were spaced about 90 feet apart and extended about 17 feet out from the stockade and could have been used as watch towers.

Today, all that is visible are the remains of the earthen mounds within the village area. Six of the seven mounds still exist and surround the central plaza where various civic and religious ceremonies were held. The largest mound, located at the north end of the plaza, is about 180 feet wide by 250 feet long at is base, and about 16 feet high. All of the earth within the mounds was dug by hand and carried in baskets from borrow pits such as the large pit west of this mound. A palisade for protection against enemies surrounded the entire area.

A kiosk provides interpretive information about the village and its inhabitants. A trail leads visitors to the mounds and other areas of the village where they can imagine this once-thriving culture found in this area hundreds of years ago.