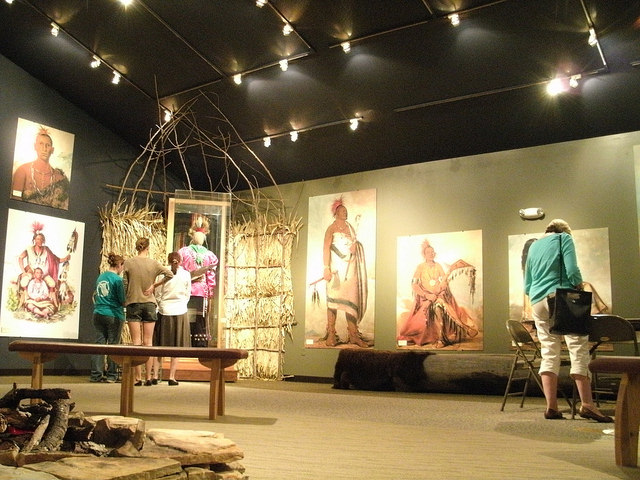 On your way into Annie and Abel Van Meter State Park, stop by Missouri's American Indian Cultural Center for a short orientation of the park. Pick up site brochures and a map and visit the gift shop. Entrance to the cultural center and the park is free. Plan to spend time viewing both permanent and temporary displays that interpret the cultural history of the nine tribes that called Missouri home in the early 19th century.

These tribes include the Otoe-Missouria, Osage, Delaware, Ioway, Ilini-Peoria, Kanza, Kickapoo, Sac and Fox, and Shawnee. In addition, you can learn all about William Clark, superintendent of Indian Affairs in 1813. There is a large display of early maps of North America depicting early European exploration and contact with American Indian tribes. Temporary displays also interpret various cultural and natural aspects of American Indians, Annie and Abel Van Meter State Park, and Missouri.

There are personal audio guides available for you to check out at the front desk at no cost. As you walk through the cultural center, these handheld wands provide brief historical accounts of the nine tribes and several American Indian legends.

A 10-minute video presentation begins with the geology of the area, followed by the life of the Missouria Indians, their early contact with Europeans, and their eventual demise. The presentation also focuses on the early settlement of the area by the Vanmeter (historical spelling) family and the development of the park, including the work done by the Civilian Conservation Corps in the 1930s.

Staff at the park offers a variety of cultural and natural interpretive programs for your class or group.

Please note that there will be times when the office is temporarily closed while staff are working on the grounds. The office telephone is monitored for messages during office hours.